Welcome to Saving for Someday! Thank you for visiting, I'm so glad you came by. I write on a number of topics, but my goals is always to be a positive part of your day. If you like what you read, you may want to subscribe for free updates via RSS or email. Thanks for visiting and I hope to see you again soon! ~ Sara

Hanukkah will fall about the same time as Christmas this year. According to the Jewish calendar, which is based on the lunar cycle, Hanukkah falls on the exact same date every year. But, the Gregorian calendar is a solar-based calendar which is why Hanukkah falls on different dates each year.

Hanukkah, also known as the Festival of Lights, is an 8-day celebration which commemorates the rededication of the Holy Temple in Jerusalem after its destruction in the Maccabean revolt in the 2nd century BCE. The story goes that upon rededication of the Temple the Macabees discovered there only to be enough oil to light the menorah for one day. It would take eight days to make new olive oil. But, wanting to do as the Torah (Five Books of Moses) said, they light the menorah and commenced to making more oil. Yet the next day the flame still illuminated the Temple. As it would for the next 7 days, allowing new oil to be made. It was this miracle that gives us the duration of Hanukkah.

There are several items that are significant to Hanukkah: Menorah (more specifically, Hanukkiah), food, dreidel, gelt (money, often chocolate now), prayers and songs. Each of these are significant and makes this festival celebration very unique among the Jewish people.

A menorah (muh-no-ruh) is a candelabra. It often has 6 branches. For Hanukkah, we use an 8-branched menorah called a Hanukkiah (ha-noo-key-uh). It is specific to Hanukkah and in addition to the 8 branches, there is a nineth spot for the helper candle which lights the others. This helper candle is called the shamash (sha-mah-sh). Hanukkah candles are not lit with matches, they must be lit with another candle, thus the importance of the shamash.

A hanukkiah may be made of any material (glass, metal, ceramic, clay, or even muffin cups!).  Many families have one for each person in the family, as it is a mitzvah (meets-vah) to light the menorah at Hanukkah.

It’s not a party without food! Most will have latkes (lot-kuhs or some say lot-keys) which are potato pancakes. I make them in the traditional way by shredding potatoes adding some chopped onion, salt, pepper, egg and a few tablespoons of flour and mixing them to make little patties. They’re kinda like hash browns if you’re needing a reference point. They’re fried in oil — oil being the key ingredient in Hanukkah! The most traditional toppings are applesauce or sour cream, and people will debate which is better. Me? I’m equal opportunity. BabyGirl? She doesn’t like applesauce so I actually have pear sauce.

There are also jelly donuts. Yes, that’s right, donuts. Popularized by Spanish and Middle Eastern Jews, Sufganiyot (soof-gahn-ee-yoat) are the main Hanukkah food you’ll find in Israel. But, they’re starting to catch on here in the US too. I didn’t grow up having these but I learned about them when I lived in Israel. Delish!

A dreidel is a 4-sided top and was invented as a way to cover up studying Torah when it was forbidden. There is a letter on each side representing the phrase ‘A great miracle happened there‘. In Israel, there is one letter that is different because the Israel dreidels translate to ‘A great miracle happened HERE‘. It is a fun game and often is played with gelt (money). Usually the money is chocolate coins and kids young and old enjoy playing. 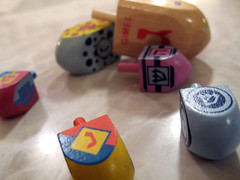 As with all Jewish holidays, Hanukkah has special prayers that are recited each night when the candles are lit. Jews are required to say the prayers for candle lighting. After candles are lit, many Jews sing traditional songs although there are modern songs that are becoming popular as well.

Hanukkah, traditionally, is not a gift-giving holiday. When I grew up my family exchanged small token gifts, but nothing significant. For me, Hanukkah was never a Christmas alternative. It has, however, grown into a more secularized celebration with extravagant gifts and many people making Hanukkah into a Christmas-like celebration.

How Do You Spell It?

OK, now that you’ve read all the way through I know this is the one question you probably want to ask. Hanukkah does not have a standard transliteration. In Hebrew there are two ways to spell it and it’s a difference of vowel placement. But when it’s transliterated into English there are a number of ways depending on where you live and how you learned it growing up. Some spell it with the ‘Ch’, others with just the ‘H’. Then of course there is the question of how many h’s, k’s and n’s to add.

So, really, it doesn’t matter if you see Hanukkah or Chanukkah or Hannukah or Channukkah, it’s all the same. Just as long as there is a menorah, some latkes and maybe some jelly donuts it’s all good!

Before I go, I’ll leave with with one of my current favorite popular songs. It’s is from a pop group called The LeeVees and it is called, fittingly, How Do You Spell ……

Sara is a life-long dreamer, creating a list of things she wants to do "someday". Realizing there is no "someday" on the calendar she's taking the steps to make her somedays a reality. Between saving for retirement and college and paying for all the usual things, many women find that they're often putting their hopes and dreams on hold. Saving For Someday is Sara's way of encouraging women everywhere to find ways to save on the ordinary so they can do the extraordinary. Sara is also a licensed attorney and writes about legal issues affecting bloggers, content creators and online professionals. This blog is for informational purposes only. You can also find me on Google+ View all posts by Sara

One thought on “What is Hanukkah?”